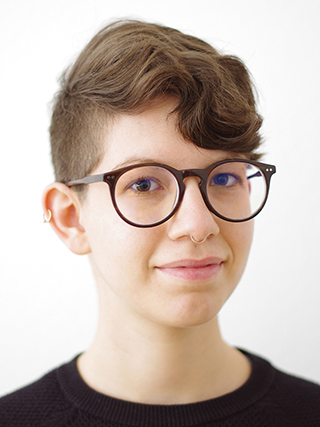 I’m holding a Bachelor of Arts in Interface Design from the University of Applied Sciences Potsdam (FH Potsdam).
My work has recently mainly revolved around questions of user privacy and trust in Human-AI-interaction. Ethical aspects are a strong consideration in everything I create.
I also enjoy working with complex data and interfaces from healthcare and science and finding ways how to make interaction with them easy and enjoyable.

It is important to me to work in a diverse environment, as I myself champion diversity and equality and fight discrimination based on gender identity and transphobia.

I’m currently working as an Interaction Designer at IXDS.

Prior, I’ve been interning at the HXD group at Microsoft Research Cambridge, where I successfully participated in the Microsoft One Week Hackathon, achieving 1st prize in one of the categories. The result of the follow-up project is expected to be going public late 2018 or early 2019.
From April 2016 to January 2017, I was a User Experience Design Intern at Google Munich, where I did the groundwork and concept for the relaunch of the Google Dashboard.

From January 2014 until October 2015, I worked for the medical technology company W.O.M. WORLD OF MEDICINE GmbH, where I designed touch control interfaces of devices for minimally invasive surgery.